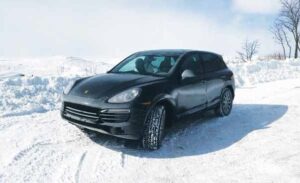 We all remember that first time it happened.  You looked outside, the snow had painted everything clean and white and soft, and whether it was due to a need or a desire, wanted or unwanted, you buckled into your chariot and headed out into the fluffiness.  The snow made the roads quiet and everything seemed perfect, until it happened.  The tires lost grip, the vehicle careened in an undesired direction, and your heart tried to escape your chest through your throat.

Now although this could happen to you in any vehicle, the outcome might be vastly different in a Porsche Cayenne with its four-wheel drive.  The cayenne was Porsche’s answer to consumers after coming to the realization that the vast majority of Porsche sports car owners also had an SUV of some sort in the stable, so in 2003 they branched out from being a sports car manufacturer and launched the Cayenne S and Cayenne Turbo.  Although they were looked at with great skepticism at first and even down upon by purists, the Cayenne soon proved its ability and now stands as the brands largest volume model.

The overall concept for transfer of power to the wheels in the Cayenne has not drastically changed over the years.  What started out as standard on all 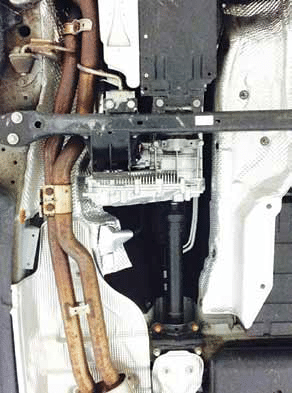 models was an electronically controlled front/rear differential with a basic ratio of 38% to 62% mated to either a 6 speed manual or 6 speed Tiptronic transmission.  This transfer gearbox also had an integral reduction gear and transmitted the power to the front axle without a mechanical differential lock.  In simpler terms that meant that the Cayenne had a tendency to drive like a rear wheel drive vehicle under normal operation, but gave the driver the benefit of the pull of the front wheels under slipping conditions, and full off road capability by way of the toggle switch in in the center console, including a low range, or alternately full front/rear differential and or rear differential lock by continued activation of the advanced off-road equipment package.

Now Porsche historically has been no stranger to four wheel drive, when Ferdinand Porsche was only 25 years old, he designed a four wheel drive electric car for the young truck company Lohner in 1900.  Many years later, in 1986 the legendary 959 would go on to establish Porsche as a leader in advanced four wheel drive systems, and supply the manufacturer with drive train technology they would use for decades after.  What originally made the Cayenne unique from the conventional sports cars and viscous coupling systems of the day, which used heat and friction to increase the pressure on clutches, was the electrically controlled clutch pack in the transfer case.  As the demand for front power transfer increased, the servo actuator turned a worm gear which pushed balls up a ramp against the clutches increasing the pressure on them and increasing the drive output to the front axle. 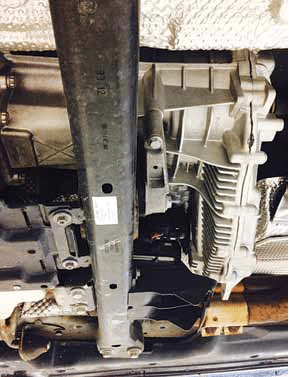 Later models evolved to the PTM Porsche Traction Management all-wheel drive system, which realized the loss of the gear reduction in an effort to reduce the ever important weight of the drive system.  Considering the vast majority of Cayennes only saw the gear reduction switch used during a service visit to confirm operation, it was likely that no one noticed.

Now the 39kg weight savings along with electronically and map controlled transfer case let the Cayenne handle and drive much like a sports car, without sacrificing the legendary off-road ability that no one ever used.  By 2011 the PTM system had integrated some of the other systems on the vehicle such as Automatic brake differential and Anti slip regulation, thus giving it the ability to have a fully variable distribution between the full time rear axle and the front axle.  Using additional software the system could monitor other vehicle parameters such as wheel speed sensors, steering wheel angle, axial and lateral acceleration and throttle input and even though there was no acronym for Porsche crystal ball, it could actually predict potential wheel slip and prevent it by diverting torque to the wheels without slip. Up to 100% of traction could be redirected away from the slipping axle if need be.  If one rear wheel slipped, power could go to the other side, and some to the front, then along with some ABS input the other three wheels with traction would do the work. If both rear wheels were slipping, then the front axle received all the power. All of this action though, happened so quickly that in a real world situation, this meant that before you even noticed that your rear wheels were spinning, the vehicle had already diverted power to the front wheels, helping pull you out of a potentially disastrous event.

In the current Cayenne models, we see the same PTM system mated to an 8 speed tiptronic transmissions in the Cayenne, Cayenne S, and Cayenne turbo.  The Cayenne Diesel and Hybrid variants are the exception to the rule, with a modified version of the familiar locking differential with a set torque split of 42 and 58 percent front and rear basic distribution.  This system is better suited for the economy modes these cars are geared towards, but still offer the response and performance Porsche owners expect.  The level of comfort and control one can feel power sliding through turns in a Cayenne Diesel on an ice track with 3mm studs is not what you’d expect of a 3000kg vehicle, but it is what you would expect of a Porsche, so I guess if that first time my tires attempted to defy the laws of physics in cold weather had been in my Cayenne and not a 1980 Corolla, my heart might not have tried freeing itself of my chest.

Tech Editor’s Note: Dirk Dunschede is a Canadian Red Seal Technician and a Porsche Gold Certified Technician with over 20-years of Porsche experience working with Porsche dealers and race teams in Canada and USA. Porsche AG manages a worldwide certification program for technicians.  The goal is to ensure the highest level of knowledge and expertise through a wide range of Porsche training courses leading up to the highest Gold level where the technician has mastered most if not all of the programs offered and is globally recognized. To qualify for Gold Certification, a technician must successfully complete Bronze testing, Silver level testing and hands on test, maintain certification through quarterly courses and online testing and complete the Gold exam and hands on test to identify and repair multiple hidden problems within a time limitation under the scrutiny of a Porsche Cars of Canada or North America Official.

Remember, as always we’re looking for new technical articles so please contact me and submit yours to:  George@ONeillAdvisors.ca

Previous article
THE WAY WE WERE . . .
Next article
PERIPHERAL VISION: Reviewing 2015…and looking ahead

Adapting to a New Reality