Home »Provinz»THANK YOU UCR: Words from Michael A. Coates 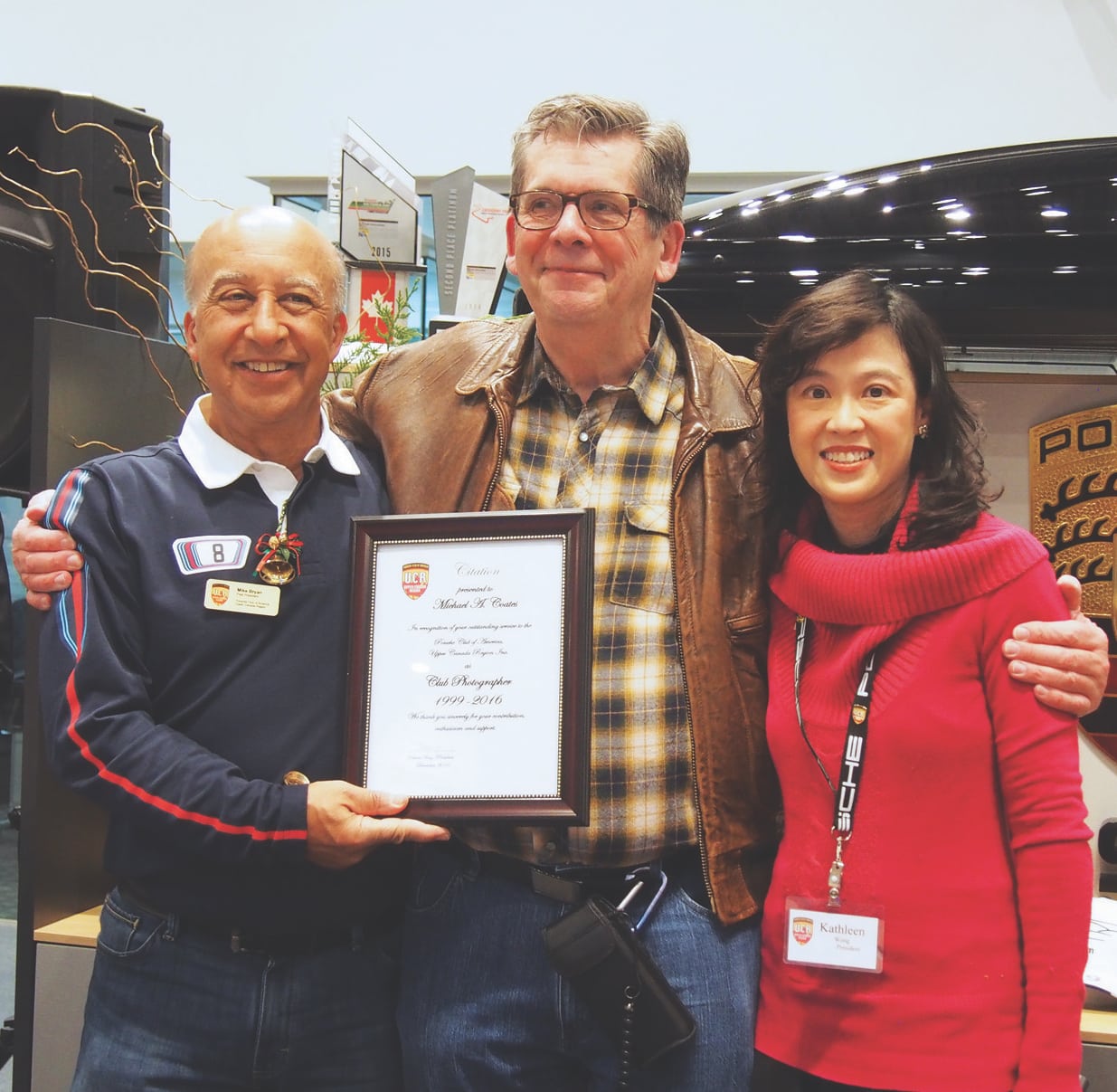 At the December Social, which was once again hosted by Pfaff Porsche in Woodbridge, I experienced some mixed emotions as this was to be my last official event as the Upper Canada Region’s photographer.

After the November Social I had sat down with Mike Bryan, who was then still the Club’s president, and told him my decision to step down – to retire myself. A couple of weeks later, I had lunch with Kathleen, who had just been elected the Club’s newest president, and explained to her the reasons behind my decision.

What took me by surprise at the December Social was a presentation by Mike and Kathleen. I had photographed a few presentations and was patiently waiting while Mike introduced that last one so I could take the picture. I wasn’t really listening so I’m not quite sure what it was he said that got my attention, but I suddenly realised he was talking about me. What an honour!

I’m much happier behind the camera than standing in front of one, and the whole thing seemed surreal leaving me somewhat speechless. However, I suddenly experienced what it’s like for people when I have them jostle around, get closer, put on some happy faces, keep their eyes open, look at the camera – or as Mike puts it- it’s like herding cats!

At the December Social it was a real surprise and a delight to see Patty Green. I hadn’t seen Patty for many years and to see her at the December Social was somewhat befitting since Patty was the one who had gotten me involved as the Club’s photographer back in 1999. Before we had actually met, Patty and I had talked over the phone and I recall her enthusiasm as well as being overwhelmed by all the acronyms she used – PCA – UCR – DE, and a whole lot more. And then there were all the Porsche car designations that all seem to start with the number 9.

It was the first Driver Education event of the year and Patty and I had arranged to meet at MOSPORT (as it was called back then). I was well acquainted with Mosport. I wouldn’t even attempt to guess at how many laps I had put on that track over the years, plus, at the time I was also shooting for Performance Racing News and was already experienced as a trackside photographer. Anyway, after a long drive to the track to meet Patty, Mother Nature had rescheduled my priorities. I parked my car, ran to the old tower, up the short flight of steps, saying to the lady impeding my progress, “Don’t stand between me a washroom!” A few moments later, now feeling relaxed and relieved, I met the same lady on the steps said I was looking for Patty Green. “That’s me” she said – and here we were, 17 years later.

When I started with the Club, we were still well entrenched in the film era. At Club events, l was usually the only one with a camera, and very definitely the only one with two cameras. At the time, digital photography was still but a rumour that if real, was generally talked about it as nothing more than a novelty – a fad – a ‘here-today-and-gone-tomorrow’ thing. Even if digital photography proved viable, it was rumoured to be so cost prohibitive, no one but a few would be able to afford one. The naysayers gleamed with self-satisfaction – right up to when Canon brought out the first SLR digital camera with a 6meg sensor for under $2,500. I sold all my film cameras, bought a Canon lOD sight unseen, and never looked back.

But times have changed and I thought it was time to change with the times. Over the past several years, the Upper Canada Region has experienced some incredible growth and the number of events has grown substantially. Too much for one person to cover it all. On some weekends, there have been multiple events taking place simultaneously. Today, as we all know, just about everyone has a camera in one form or another and I encourage people to take pictures, both for their own memories and/or to be submitted to the Club.

The sad part is, over the years I have met so many people and have made so many friends, it’s tough to say goodbye, but Mike and Kathleen have left the door open by saying that I am always welcome to come out to events – plus, I have offered to help at the 2017 Can/Am Challenge.

So, all I have left to add is my sincere thanks to everyone in the Upper Canada Region for ‘taking me in’ as it were, despite the lack of Porsche ownership, and for making me feel welcome and part of the Club. As the Club’s motto proclaims – “It’s not just the cars – it’s the people”, and I have certainly experienced the sincerity of that over these past 17 years.

Thank you all so very much – Michael