Where Porsche Fought and Won 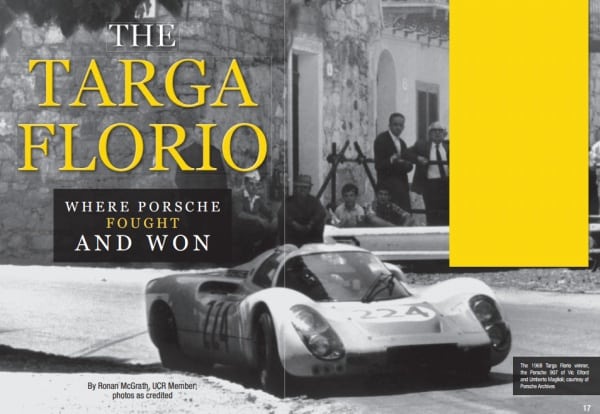 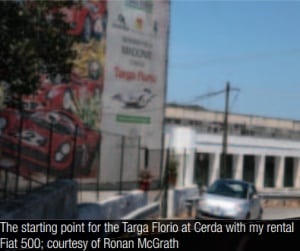 Under a hot Sicilian sun, I parked the little Fiat 500 on a patch of pure history. Here in the Madonie mountains was the start of the legendary Targa Florio—the very first and very last of the great road races. From 1906 to 1973, interrupted only by wars, it was one of the most important events in the auto racing calendar.

In its final form it was a 72km circuit on narrow, mountainous Sicilian public roads with 567 turns and a ten-lap race. It attracted the greatest drivers and cars in the world, and has a long and intense history of Porsche involvement. As cars got faster and safety became more of an issue after the 1955 Le Mans disaster, road racing fell out of favour, and first the curtain came down on Mille Miglia and finally on the Targa.

In 1919, a young Enzo Ferrari drove his first race here, and in 1924 the designer of the winning Mercedes drove one of the cars himself. His name was Ferdinand Porsche, and his co-driver was one Alfred Neubahr who later went on to manage the legendary Silver Arrows. 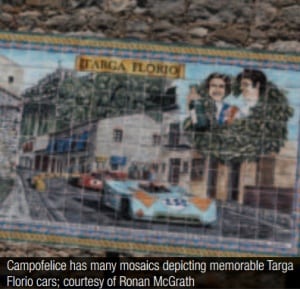 It’s quiet now, not a car in sight, the stands and pits locked and abandoned. Behind the chain link fence sits a bust of Vincenzo Florio who founded the race in 1906. A large sign denotes the historic race. Yet, this was once a centre of frantic preparation, cheering fans and fierce competition. Cars left on a timed start as in a rally, the smallest cars first. Driving down the narrow road, it was hard to imagine how the fastest cars of their era took off flat out on a bumpy, narrow track that had no safety margin, but did have jumps, hairpins and sections that ran right through the narrow villages along the way.

Driving now through the streets of Cerda, Collesano and Campofelice, with their homes and shops built directly on the street and densely parked cars, I was filled with awe at the skill of the drivers who piloted their sports cars through cheering crowds,  only feet away, the racing oil smell and the scream of the engines filling the old streets. Practice was done on open roads with the ever present threats of sheep, pedestrians or regular traffic. 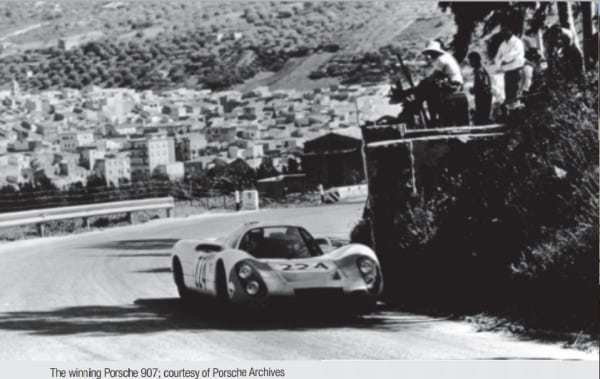 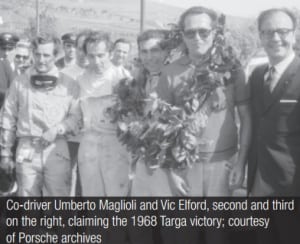 Each village has a museum to the Targa Florio, the best of which is in Collesano. Also in Collesano, a series of mosaics depicts the great cars and drivers in action on race day. Race day was like a huge national holiday in Sicily, with people lining the route, picnics and wine everywhere, old men playing cards, and fans sitting along the unprotected walls. It is a circuit with no time to relax that favours light, small cars.

This was where Porsche and Ferrari had a long-running battle for supremacy and where both manufacturers brought a wide variety of cars over the years. Ferrari raced everything from the 250GTO and Testa Rossa to the 512S, while Porsche ran the 550, RS 60 and 61, 904, Carrera 6, 907, 908 and 910. Porsche won it 11 times, more than any other manufacturer. Ferrari won seven.

Outside of the villages there is almost no traffic, and occasionally it is possible to see large sections of the looping road below as you climb. The road surface is treacherous now, with major subsidances, cracks, and poorly patched sections. In some areas anything more than 5kmh would be foolhardy. There are innumerable blind corners and sudden drops. Towards the end of the track is a six-kilometre-long, arrow-straight section, longer than the Mulsanne, that could be taken flat out. This meant the cars had to have a set of close-ratio lower gears and then a gap to the top in order to deal with the two track sections. 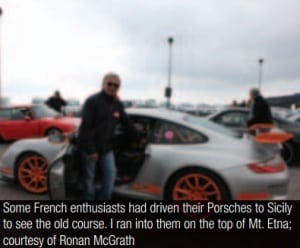 Stirling Moss, Phil Hill, Fangio, Nuvolari, Graham Hill and many other famous names drove here, but there is one Porsche driver who is particularly associated with the Targa Florio. His name is Vic Elford. Vic started as a rally driver and had a very successful career, culminating in driving a works 911. Huschke von Hanstein persuaded Elford that the Targa was sort of like a rally, and that he might
be good at it. In 1967 he ran there for the first time, and came third in the race. With his natural talent, road car experience and photographic memory, the Targa was a natural for him.

In 1968, he won the Monte Carlo rally, the 24 hours of Daytona, the Nurburgring 1,000km (which he would win twice more), and the Targa Florio, all for Porsche. The 1968 Targa victory was one of the greatest in the history of the race. Elford would always be very quick here, and set the fastest laps in three Targas, as he had committed the entire track to memory.

Things were looking good when disaster struck. A bad centre lock wheel nut on his 907 unscrewed itself and the wheel almost came off. Elford jumped out, tightened the nut and set off again only to have the same experience, causing him to slide into the curb and suffer a flat. The obliging crowd lifted the car up and he changed to the space saver, limped back to the pits and changed all wheels and nuts.
It was only lap two of ten, and he was already 18 minutes behind.

With nothing to lose, he drove flat out for the rest of the race. He drove seven of the ten laps, with his partner Maglioli driving the remainder, and they took the lead in lap nine. Nobody knew if the 907 would survive the pressure, but it did. In a rare moment of appreciation, Porsche changed its policy of only featuring its cars on its victory posters, and for this one time, the poster was of the driver who beat all the odds.

I had a chance to talk to Elford about the Targa and the team.

How much input did drivers have into car setup?
“Initially, not much. We were given the cars and told to drive them! As time went by we managed to persuade them to change setup based on our feedback, but as we practiced at the Nurburgring we began to have influence on the setup. At the Targa, when I was driving the 908/3 I was banging on the rev limiter in every gear by the time I got to the end of the curve at Cerda. I needed 200rpm in every gear, so they did change the ratios.”

How did the team work with Ferdinand Piech?
“Piech was, in my opinion, one of the greatest engineers ever, maybe better than his grandfather. I got on very well with him and he was very persuasive at Porsche in getting what was needed to develop the cars. He had a lot of respect for Hans Mezger and it was mutual.”
Where could you make up time at the Targa?
“Everywhere—there is no specific place that is especially easy to make time.”

You placed first, second and third in the Targa. Was there any race that was a particular disappointment for you?
“The 1969 race was the most disappointing. We had an alternator go and lost too much time in the pits getting it fixed. We still came
second!”

What was the worst of the Porsches that you drove at the Targa, and the best?
“The 908/3 was easily the best car I drove there: small, light and perfectly set up for the conditions. There was no worst car. I do
remember that in 1970 Piech decided to bring a 917 to do a demo lap there so I am the only driver who ever drove it on the circuit. It
was all over the place, impossible to drive. By the time I finished the lap they had to lift me out of the car.”

During his career, Elford drove all of the great Porsches and was a fierce competitor. Yet during the 1968 Targa practice when fastest laps were being set, he stopped to check if his fellow Porsche driver was OK after an accident. In 1972 while driving for Alfa he stopped during the Le Mans 24 race where Jo Bonnier had fatally crashed, running over to the other car, (a Ferrari) to check if the driver was still inside. For this the French government gave him the Legion of Honour. I asked him about stopping for a fellow driver. “Of course I did,” he said. “Maybe it would not be necessary today.” I wonder if the same spirit would be there in current competition.

Elford is a popular attendee at many historic Porsche events, and in 2012 was honored at the Amelia Island Concours where many of his cars were on display. Watching the video of him driving the 908 across the manicured lawns, it is worlds away from the unforgiving, blazing hot, dusty ribbon that is the Targa, with its cheering Sicilian crowds and minimal safety, and Vic in the same car thundering through the old village, there for a moment only, and then gone, leaving only the dust behind him.

The great Porsches that once charged along these narrow roads are long gone of course, and as I departed, I imagined those incredible times. The next day, on the top of Mount Etna, I smiled at the sight of a gathering of Porsches from France on a driving holiday. Guess where they were heading.